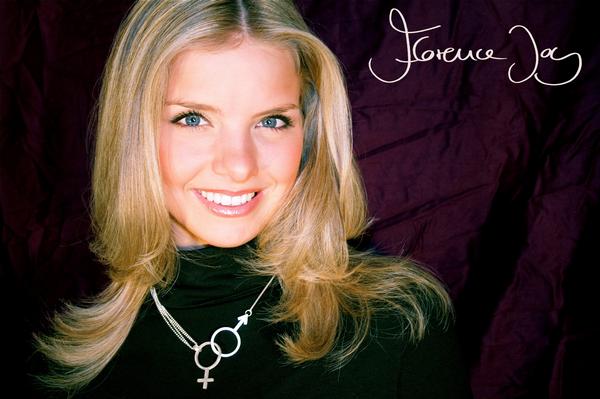 Florence Joy Enns (Büttner) is a famous young German singer, writer and actress. She likes to travel and has visited several countries from Europe, Israel and the United States. Florence plays guitar and the piano, and she speaks her native German and very good English. Most of her songs from the album “Hope” are in English.

In 2006, Florence Joy Enns (Büttner before she married) was invited to perform in the (dome) church of Munich for the inauguration of the Soccer World Championship. One year after this astonishing performance, she started acting in the role of a sweet girl called “Jasmin” in a German daily soap “Ahornallee”. Also, Florence wrote a book called I want to live truthfully and real, which tells about her journey through the German casting show “Star Search 2” and mostly how she lives her life with Jesus Christ.

Florence was born in a city called Zeven, in the north of Germany close to Hamburg; she has an older sister and a younger brother. Her family has lived in Zeven, Tostedt, Dresden, Munich and Cologne. Sometimes she moved with her family because of work, but the last move was because of marriage. Florence has two children; her son Lennox was born in 2009, and her baby girl Kiana was born in 2012.

Octavian D. CURPAS: Can you tell me something about your husband? When and where did you meet? How would you describe your husband?

Florence JOY: My husband is German. His name is Thomas Enns. We met in a concert in 2006; I was singing and he was playing with his string ensemble, supporting my song. Yes he is an artist, musician and singer. He is the leader of a bimonthly youth event called “base”, and he studied business administration at the University of Cologne. He is a fully devoted Christian, totally excited about God. He is a very loving and sensitive person, the most wonderful husband and a great father.

Octavian D. CURPAS: You are a very busy woman. What is it like to be a mom of two children?


Florence JOY: It was always my dream to be a mom and it is a big blessing to me. Of course it has challenges but all in all, it is a wonderful blessing from God to me.

Octavian D. CURPAS: At what age did you become a Christian? What made you decide to give your life to the Lord? Which Christian denomination do you belong to?

Florence JOY: I was raised in a Christian family. When I was 13, God revealed his love to me and that he is my heavenly and true father. I wanted to get water baptized; this
was the start, when I wanted to live for Jesus. I am in a church that belongs to the German branch of the Assemblies of God. To me the denomination is not so important. The most important thing is my personal relationship to Christ.

Octavian D. CURPAS: I just listened to one of your songs in German and I really enjoyed it even though I didn’t understand much. The title is “Mein Ziel” and I found it on youtube. (http://www.youtube.com/watch?v=6AOYTqDyMFA) What’s the message of this song? When and where have you been singing?


Florence JOY: The song says: “You are my goal, you are my passion, you are my way, you are my strength. I look for you and I run to you and leave the past behind. You are
always there - You are my reason, my goal.” The “You” in this song is Jesus Christ. I performed this song in the dome (church) of Munich. It was a church service live on the national TV station in Germany for the inauguration of the Soccer World Championship 2006. It was a big privilege to sing at the inauguration of the soccer World Cup. I had the opportunity to share my testimony for Christ live on the national TV station.

Octavian D. CURPAS: You collaborated with Hillsong for some songs in German. What songs and when and how did it happen?


Florence JOY: It started in 2005, when we recorded the first German Hillsong album and I was the lead singer on that CD. Since then, I was invited to some Hillsong conferences and to record another of their CDs.

Octavian D. CURPAS: How many albums do you have? Is “Hope” your first album?

Florence JOY: Yes it was the first and the only one. There are 13 songs on there. Most of the songs are in English and one is in German.

Octavian D. CURPAS: What’s your favorite song and why? Which of your songs best defines you?


Florence JOY: It still is “Only hope”, which is the main song of my album, and that’s why the album is called hope. This song tells about the hope we have in Jesus and that
He has a plan for our lives.

Florence JOY: The title means “I want to live truthfully and real” and that is the theme of the book. The book tells about my journey through the German casting show “Star search 2” and mostly how I live my life with Jesus Christ. It also tells a bit about my family and my surroundings at that time after winning star search.

Octavian D. CURPAS: How many times have you visited the U.S. and what states? What comes into your mind when you think of Arizona?

Florence JOY: I’ve been to the U.S. five times, three times in Florida and two in California. If I think of Arizona, it means hot weather, horses, and cowboys. I like the friendly people in the U.S. a lot and the huge churches, for example Calvary Chapel.

Octavian D. CURPAS: Why is Israel an important country for you and for your husband?

Florence JOY: It’s the Holy Land, the land of God’s people. We support a mission’s project, called AEBM (American European Bethel Mission). We have been in Israel several times with this mission organization and helped poor people.

Octavian D. CURPAS: What countries do you want to visit in the future?

Florence JOY: I would love to fly to Australia.

Octavian D. CURPAS: What do you know about Romania?

Florence JOY: The only connection I had with Romania was a friend in my former church who was Romanian.


Octavian D. CURPAS: Which holiday do you like the most and why?


Florence JOY: I like Christmas, because of the message that Jesus came into our world as a human being. I also like the setting with snow and lights and the smell of cake in my kitchen…

Octavian D. CURPAS: Are there any steps one should take to remain on track spiritually?

Octavian D. CURPAS: What is the greatest prayer God has ever answered for you?


Florence JOY: He answered my prayer when I was still very young (5 years old). It was my first “big” prayer. I prayed to God to have a little brother, though my parents did not want to have another child. Through some circumstances, which were a miracle, the mind of my mom was changed and I got a little baby brother.

Octavian D. CURPAS: What is coming up new for you?

Florence JOY: Right now we are concentrating on “Base,” the big youth events we have. We are writing songs for “Base” and hopefully for a “Base” CD. Of course, right now I am a fulltime Mother of two wonderful children.

Octavian D. CURPAS: If you would have to deliver a message for this generation, what would you say?


Florence JOY: I would say, you are loved unconditionally and totally by Jesus Christ. You are created for a purpose. The love of Jesus can and will set you free from
everything. Try Jesus; do not write him out of your life. Be open and search out if there really is a God.